For everyone that prefers a low-profile DreadBall pitch, I’ve put together another card. Before we introduce the new card, let’s go over a bit of history.

When DreadBall was first released in 2012, it came with a board for a pitch.  This 1st Edition pitch was much simpler and much smaller with a lower profile (low-profile) on the table than the larger 2nd Edition pitches we’re familiar with today.

As more and more Coaches took to the game, they began to see opportunities to improve upon the basic 1st edition folding board pitch. The idea of printing the pitch on a neoprene mat was attractive. Without the original artwork for the pitch, we had to recreate the entire pitch design before we could print it. The first new designs were merely recreations of the original, but on neoprene.

Those neoprene pitches were nice, but the hexes were the same size as the original. Often players on the pitch, when next to each other, did not have enough room. The next pitch designs increased the hex size from the original 25mm to a spacious 30mm.

The larger hexes were great and opened the door to the concept of improving the DreadBall pitch. In late 2013 and early 2014, features that would require a larger area were added; spaces for the card deck, discard pile, and Action Token storage. One of the first larger pitches incorporating these features was the Neo-Tek Tesla Dome. 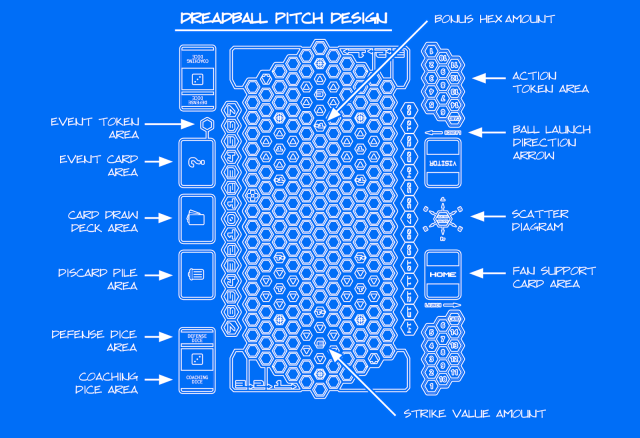 Mantic, acknowledging the fan improvements, released their own large size neoprene pitch that included the new pitch additions. It was named the Gruba-Tek VII Coliseum as a nod to Shawn Grubaugh who, as mentioned, created one of the first large size pitches.

The tracker could be numbered from 1-14 because in 1st Edition DreadBall, all players HAD to be numbered between 1 and 14. This numbering requirement was based on the way the cards worked in 1st Edition. The cards in 1st Edition DreadBall often affected a random player. To determine which random player, a Coach would draw a card and read the numbers down the right hand side of the cards. The first number (1 to 14) that matched a player on the pitch indicated that player had been randomly selected.

When Mantic decided to release a 2nd edition of DreadBall, they looked at what fans had been doing with the pitch design and decided to incorporate almost all of the additional features into the official 2nd Edition pitch. This meant the new official pitch was of the large variety, on a quad-fold board.

The random selection of players was removed in 2nd Edition. There was no longer a requirement for players to be numbered only between 1 and 14. Despite no longer being limited in the numbering of players, the Action Token tracker remained on the new official pitch, still using 1-14.

I have played on all of these different pitch designs across many different versions of the game. Overall, the fan additions that Mantic adopted into the official design are fantastic.

In my opinion, the Action Token track should have been removed from the 2nd Edition pitch. It’s a nice feature, but it’s not needed. Keeping track of your Action Tokens can be done in a few other ways. With no requirement to number players using only 1-14 for player randomization, leaving the Action Token tracker on the pitch in 2nd Edition has always bothered me. That mentioned, it is an easy way to track your player Actions and can certainly help coaches that are just learning DreadBall.

Here is the new card(s). They are designed to fit on big cards (3.5″ x 5.75″). There is a version with and without a designateds area to tuck your Fan Checks under as well as 2 different numbering patterns, Left to Right and Top to Bottom.

The Features of a State-of-the-Art Low-Profile Pitch

Wrapping up, let’s take a look at all the feature on a modern low-profile pitch. It’s a long way from that original pitch from back in 2012. 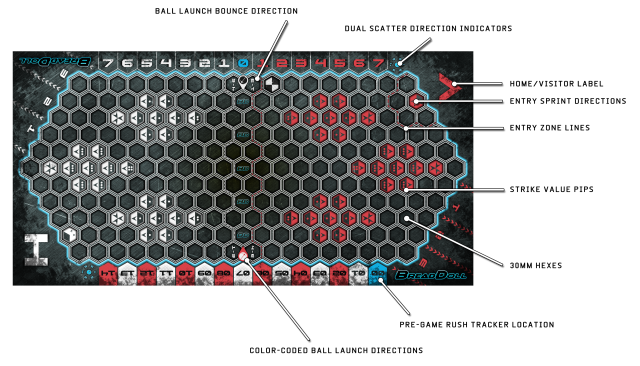 EDIT: See all our pitches HERE including my newest design made for the Ontario DreadBall Leage (ODBL).

4 thoughts on “Scattered Scullery: Evolution of The Pitch”

DreadBall is the sci-fi sports boardgame by Mantic games.

BreadDoll authors are dedicated and enthusiastic fans of this amazing game.